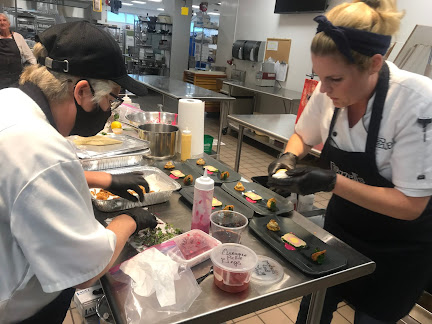 RALEIGH - As she unpacked and carefully placed ingredients onto a metal workstation, chef Amanda Ezzell of Warsaw pulled out one of her secret ingredients, a Ziploc bag filled with three ears of locally grown sweet corn, plucked from a farmer’s field in Duplin County.

Armed with a well-seasoned cast iron skillet and lots of fresh vegetables, Ezzell had just arrived at the semi-final regional round of the North Carolina Restaurant and Lodging Association Chef Showdown, held on July 19 at Wake Technical Community College’s Baking and Pastry Campus in Raleigh. Along with 19 other chefs, Ezzell will be advancing on from the regional competition to the final showdown, to be held August 9 at Bay 7 in Durham.

“I want to represent not just myself, but my family, my Southern roots,” said Ezzell, who runs Ezzell Catering and the Somethin’ Good food truck. “I’m representing our farmers, because without them we wouldn’t have food to cook, we wouldn’t have a job, and I’m just taking this opportunity to represent them as well as I can.”

The night before the competition, while thoughts of recipes and favorite foods kept her mind too busy to sleep, Ezzell roasted the ears of sweet corn on a bed of pecan wood chips and charcoal, giving them an unmistakable smoky flavor and, hopefully, the edge she needed to wow a panel of judges from around the state. Along with collards, rutabagas, pickled beets, cinnamon pickle rings, sweet potatoes and chicken, the roasted corn was showcased in creative ways on the plates she presented to the judges.

“I thought about the food we had on a Sunday afternoon when all the family was over and all the items we would have on a Southern table, and I’m not talking about three or four items or eight or ten items,” Ezzell said. “I’m talking about a table full, hundreds of little dishes with a sampling of everything, and you could get a spoonful and take it with you. I thought about things my grandmother would grow in her garden.”

Using those Sunday dinners at her grandmother’s table as inspiration, Ezzell took her favorite old-fashioned chicken and dumplings to the next level: a French-style terrine made of boiled chicken pudding, shaped into a loaf and wrapped with a blanched green collard leaf. She carefully sliced the loaf, revealing a bright pink pickled egg, perfectly colored from a bath of beet juice.

Meanwhile, as the competition clock on the wall continued ticking, the sweet smell of chocolate ganache filled the kitchen as a pastry chef worked at a station nearby. The sound of clanking filled the air, as another chef pulled a metal sheet pan from a stack. At another station, plates were already lined up and ready to be judged.

“Here, try this,” Amanda’s mom and sous-chef, Carolyn Ezzell, said, offering a hungry onlooker a vegetable fritter lifted straight from the hot cast iron skillet where it was cooking.

Carolyn continued working over the stove, lifting the last piece of old-fashioned lacy corn bread from the skillet. She moved to a different pot and began frying thin French fry-sized twists of chicken skin, browning them just right to crunch when eaten. The heat was on, with only a half hour to go before their prep time was up.

Amanda spread out a blanched collard leaf, cut it into strips and rolled it into a tiny log. She carefully placed the collard “logs” standing, then used tweezers to precisely place her unique pepper relish atop the greens.

“Instead of putting a normal pepper vinegar sauce on it, we put a blueberry vinegar mixed with beets and hot pepper vinegar and it gave it a sweet heat flavor,” Amanda said.

With less than five minutes remaining on the clock, Amanda and Carolyn continued plating each item, placing the chicken pudding terrine in the center of the oblong plates on top of a vibrant smear of pink beet puree, the lacy corn bread propped up between two collard “logs,” and a vegetable fritter topped with a dollop of yellow corn puree and specks of fried pork fatback. Small dots of yellow corn puree and pink beet puree finished off the colorful plate, giving it the appearance of an artist’s palette.

Glancing over the plates one last time, waving her tweezers over the plates just in case something needed tweaking, Amanda put her hands up and smiled, “I’m done, I’m not touching anything else.”

The perfected plates were placed in front of four judges, themselves past winners of the competition. The judges called her whimsical take on “Sunday dinner at Grandma’s House” delicious, referred to her cinnamon ring pickles as “super old school,” and declared “each ingredient is cooked perfectly.”

“Every item on this dish is an item you would find at my grandmother’s table on a Sunday after church,” she told the judges. “I love color and being a little playful with food. Food to me, it’s more than nourishing the body, it’s nourishing the soul.”

The judges’ choice for the NCRLA “Chef of the Year” and the “Pastry Chef of the Year” will be announced during the Grand Finale on August 9 at Bay 7 in Durham. The top 20 chefs, including Ezzell, will recreate their competition dishes to be served and sampled by 250 attendees, who will cast their vote for People’s Choice Chef of the Year.

The Top 3 chefs will serve as ambassadors for the state’s Got to Be NC agriculture committee and the NCRLA. Six North Carolina mixologists, representing individual North Carolina distilleries, will also participate on August 9. The event is open to the public, but tickets are sold out. Follow along on social media for an announcement of the winners @NcrlaChefShowdown. 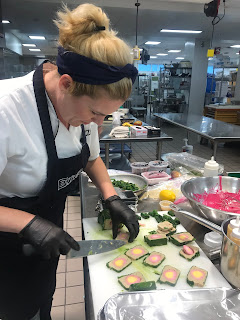